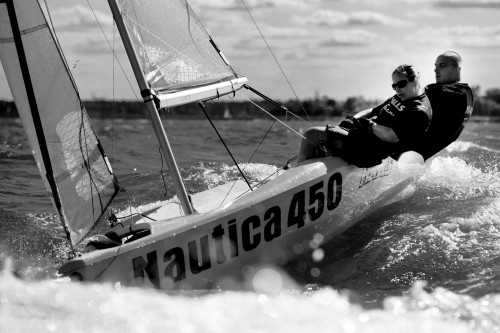 Nord Cup 2013 regatta’s are over and with them the outcome of Polish Championships in Nautica 450. Twelve boats from all parts of Poland entered Bay of Gdansk, half of which were FUN variants. During 3 intensive days 9 races were completed in mostly favourable weather conditions.   At some point wind started blowing very strongly, giving all of the participants opportunity to earn Neptune’s respect.

First day welcomed sailors with an unpleasant rain, which took several hours  to finally stop just before the first race should start. Unfortunately together with rain the wind also stopped immediately and by the decision of judges the race was postponed. Most of the crews came back to harbour but some, including Halls Team – Konrad Berezowski and Anna Kozinska, stood and despite the low wind conditions tried to get some extra training before the official start.  Did it pay off? Wait and see.

For Szczepan Wronski, this year débutant in Nord Cup, his first start on Nautica 450 became an interesting and enlightening experience.  Szczepan usually sails on Hobie Cat 16 and during the I weekend of NC2013 together with his wife Marta they took 2nd place in this class. For starts on Nautica 450 Szczepan joined Boleslaw Plachecki . „On Hobie you get on trapeze and work directly through the mainsail, on Nautica 450 the most important thing is to properly balance body weight.” –Szczepan notices – „It needs a little bit of a time to learn this boat properly, but once you’ve done it, the experience is great.”

There is one crew that deserves a special mention – Jarek Wroblewski and Piotr Rasinski that despite sailing on FUN variant, were intensively fighting with top RACE crews and totally dominated other FUNs. Even a protest made by POL 50 crew about a possibly tight turn, did not influence the outcome of regatta. Judges rejected protest founding no guilt in POL 48 crew. That, combined with excellent results in all of the matches, made Wroblewski/Rasinski 2nd in overall classification and 1st in FUN variant. “It’s my third time on Nord Cup, every time with different skipper.” – Piotr Rasinski laughs – „Jarek is a fantastic skipper, I’ve learnt a lot from him. Will definitely take part in next Nord Cup, but with whom – I don’t know yet.”

For Witold Malecki and Maciek Odwazny (FUN) the main competitors became Robert and Jan Rudzinscy (RACE) from POL 40. Those two crews were constantly clashing in naval skirmishes of who will take a better starting place, who will adjust better to the changing wind and grab a few meters more ahead of rival. They’ve finished regatta with the same amount of points, but better race balance made POL 40 crew 3rd in overall classification. “We were doing much better when the wind was strong, but the moment it became soft, our lack in skills and experience was obvious.” – Witek Małecki says.